Minecraft, a masterwork of Mojang Studios, bestows upon its players the ultimate possibilities of surviving in a dynamic world of infinite boundaries, exploring, crafting, and building your very own world from the smallest of dripping shelters to the colossal castles.

12 Ways to Fix Minecraft Crashing With Java Not Responding Errors

Even after the course of 9 years, it not only exists but, most surprisingly, rules the gaming industry all across the globe. It’s sad to say that such art was made in Java language, casting runtime complications, and much more. Sparing the sermon for now and exploring a way out of Java not responding dialogue window.

Don’t fright out. It’s nothing new – probably it may pop up due to The Mojang window pops up with a notification, freezing the game permanently, forcing one to end the Minecraft Launcher process via Task Manager. Such notorious notifications ruin every unfortunate Java program. 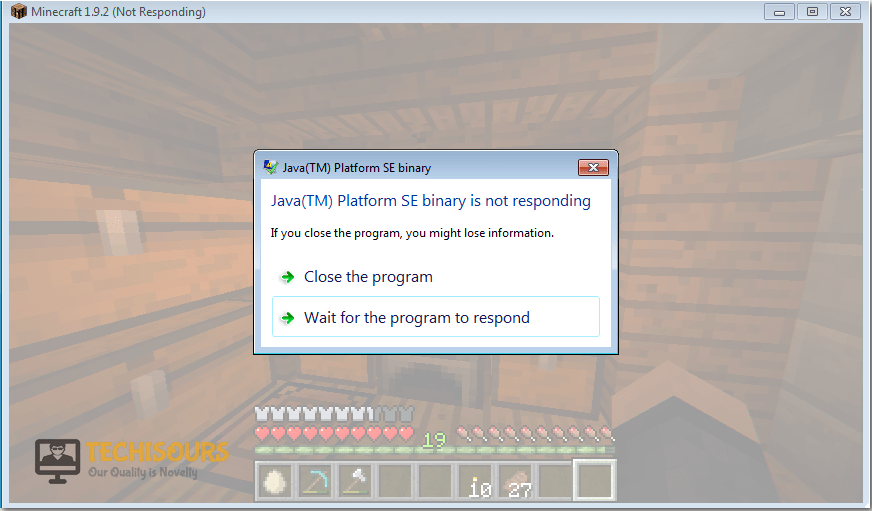 The Solution Out of Misery An outdated version may be spoiling the mood!!!

Chances exist of Discord being the real culprit behind, so 8. Repair corrupted files of the system

Restart and give Launcher a shot.

B. DSIM scan (if above one fails)

Hit enter after each of command

Restart and give your luck a try.

9. Remove all MODS of Minecraft

The MODS might be causing the wind to blow. Shun them out for the peace and calm that you once had in Minecraft.

Restart the system and Give Launcher another try.

If you have come so far without any luck, endure the last and final pain of uninstallation.

A few cases reported of the vanishing of the error dialogue in a span of some seconds to a few minutes, probably Windows takes time to troubleshoot and launch the game if the magic works. So, take a chill pill.